The Art of Selling Movies 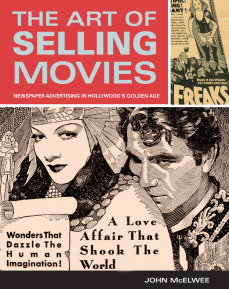 "Featuring everyone from Valentino and Pickford to Bardot and Hitchcock, this is a wonderfully entertaining and insightful coffee table tome."

"...a panorama of newspaper advertising from the early teens to the end of the 1960s. McElwee’s lively and informed commentary runs through more than 400 examples of the strident black-and-white collages that have crammed the entertainment pages of America’s far-flung press."

"... fun and fascinating, tailor-made for browsing - with pages and pages of images and captions - or for reading from cover to cover with lots of historical observations and context."

"... an attractive gift book with excellent reproductions of all the art -- going back to the 'teens -- printed on heavy, glossy paper and handsomely bound."

and Inside Warner Bros.

HEAR the podcast of Mike Gebert's chat with John McElwee at Nitrateville.

Customers can’t pay their way into two shows at once or visit both on the same evening, so theirs is to choose, and yours is to make sure they choose you. No stress really, for it is only your livelihood at stake. Imagine you’ve been hired to manage a theatre. Or maybe you bought one, and now comes the job of running it. As with any business, there’s a learning process, details anyone of reasonable intelligence can learn and eventually apply. But ... you’re in show business, a decidedly creative enterprise. You must appeal to sensibilities more complicated than your neighboring merchants with their loaves of bread and lawn mowers.

Advertising movie after movie calls for nonstop engagement of readers’ eyes plus penetration of minds, your platform a sliver of newspaper space. Folks won’t attend just because your theatre is open and showing films. Plenty of venues, some on the same block, are doing as much. You have to sell your show but also take attendance away from competing theatres. 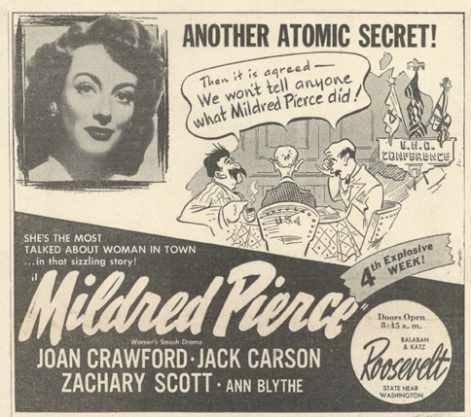 Featuring all-new content by Greenbriar Picture Shows blogger John McElwee, The Art of Selling Movies: Newspaper Advertising in Hollywood’s Golden Age explores the winning of the hearts, minds, and wallets of 50 years of American moviegoers through the canny use of words, images, and white space to lure 'em into the dark. Exhibitors needed the equivalent of multiple graduate school degrees to make it in the show business jungle. They were capitalists to make the bottom line work; sociologists to understand the nuances of their geographical regions; psychologists to unravel the emotional wants and needs of the ticket buyer; and fine artists to translate all this information into a rectangle of preciously purchased newspaper ad space. 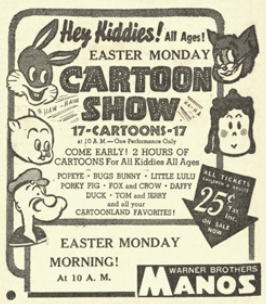 Decade by decade American culture evolved, outpaced only by new technologies that shaped the expectations of the moviegoing public. This was the rocket that exhibitors rode through the era of the picture palace. Whether you owned a walk-in theatre, or "hardtop," or a drive in, known in the trade as an "ozoner," the pressure was on every day of the week, every week of the year to keep doors open and pay the bills.

See how they did it, whether with the rich artistry of pen and ink or the slap and dash of cut and paste. In all cases what they created will live on forever as twentieth century folk art, captured within the covers of The Art of Selling Movies.

John McElwee is the author of Showmen, Sell It Hot! Movies as Merchandise in Golden Era Hollywood, winner of the 2013 USA Book Award in the category History: Media & Entertainment. John is a lifelong film enthusiast who began reviewing new movies in print at age 14. He has taught and lectured on film and has programmed extensively for colleges and universities. John has consulted on various documentaries about Hollywood history, a number of these projects using items from his film and still collections. He also has contributed to DVD releases of classic films, including King Kong and The Adventures of Robin Hood. John’s articles have appeared in Films in Review, Monsters from the Vault, and Noir City Annual. Since 2005 he has hosted the widely read Greenbriar Picture Shows website, which has attracted more than 1 million site visits and recorded more than 3 million page views. This is John's second book.