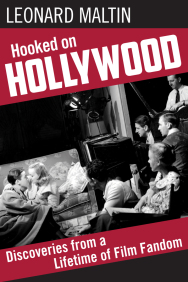 Discoveries from a Lifetime of Film Fandom

Praise for Hooked on Hollywood:

"Nearly 50 years since that first edition, Maltin, who went on to write many more books and become a TV fixture on "Entertainment Tonight," is still at it.

"Hooked on Hollywood: Discoveries from a Lifetime of Film Fandom" is his latest, and it talks briefly about his long professional career. But mostly it salutes his early days as a dedicated amateur who, armed with the White Pages and a tape recorder, tracked down aging stars for interviews collected here for the first time.

A genuine historian, even then, the knowledgeable Maltin dug deep. But there are plenty of great, gossipy stories, too."

"One of America’s most famous film critics, Leonard Maltin, is an expert on the evolution of film, the grit and the glory, the ugly and the oh-so-beautiful. He has gotten to interview some of the most famous people in the world, and gotten them to open up in compelling ways. Not everyone can live and love their career, but Maltin has done so with his newest effort, and he draws you in along with him."

"This book is entertaining and engaging for golden age film fans and historians. Through the articles and interviews the reader will discover a new appreciation for the complicated filmmaking process. Studio heads, directors, composers, actors all the way to assistants and extras have decisions to make and parts to play that determine a film’s financial and entertainment success. Through Hooked on Hollywood, readers will learn how actors and filmmakers responded to the first talkies, how remakes became popular way before modern film, learn the challenges of early equipment like cameras, and complications surrounding actors’ contracts for particular studios. While the book tells stories isolated to certain subject matter, those pieces reflect the grander scope of early Hollywood."

"This enjoyable anthology will be a welcome addition to the bookshelves of classic film fans.

Listen to a podcast featuring Leonard talking about HoH with Steve Darnall of Nostalgia Digest.

Inside Hooked on Hollywood, Get the scoop on:

Leonard Maltin finds the answers to these questions and hundreds more in Hooked on Hollywood: Discoveries from a Lifetime of Film Fandom. Leonard is America’s best-known film historian, film reviewer, and author of books that have sold more than 7 million copies. In Hooked on Hollywood, Leonard opens up his personal archive to take readers on a fascinating journey through film history. Included are some of his early interviews with film greats conducted by a teenaged Leonard Maltin in the late 1960s, and later, more in-depth interviews conducted with filmmakers and stars of Hollywood’s Golden Era—interviews that have never been published in book form. Also included in Hooked on Hollywood are featurettes—articles written by Leonard for his Movie Crazy newsletter about great films like Casablanca and the people who made them. What emerges is a fascinating, often hilarious journey through the soundstages and remote locations of Hollywood to see how the movies we now call “classic” were really made.