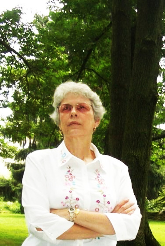 Nancy Myer was born in New York State and spent her youth traveling. Her father worked in the U.S. Foreign Service, work that took him to Brazil, Chile, Ecuador, and Afghanistan. Nancy went to high school in Beirut, Lebanon. After high school she returned to Delaware, her father's home state, attended the University of Delaware, and graduated with degrees in Spanish and English. While in Delaware she married, adopted two sons Blake and Travis, and gave birth to a daughter, Heidi.

Over the years, Nancy’s psychic abilities expanded and she began to express to people the impressions she was picking up. This caused an unexpected problem as friends would visit and not go home because they wanted to ask her questions all night. Finally she set up office hours so that she could get some rest and take care of her children. That's the odd way in which Nancy's career as a psychic got started.

During a community college seminar in which she demonstated psychometry, Nancy was handed a ring for a reading. Nancy held the ring in hand and looked not at the person who had handed it to her, but at another man who turned out to be the ring’s owner. She began talking about a new job that this man was about to start and he interrupted her and said that no one knew about his new job—as head of the Delaware State Police. For the next nine weeks this police officer tried to convince Nancy to try police work. She did not believe it would be effective but finally gave in to get him to stop calling, and thus began a distinguished career as a psychic detective. In a 30-year career for law enforcement, she has worked hundreds of missing persons and murder cases and given new information that proved to be correct 90 percent of the time.

Nancy continues to do readings and recently completed work on her 900th criminal case. She has appeared on the national broadcast series, Unsolved Mysteries, Geraldo, Psychic Detectives, Psychic Investigators, and on many local and national radio and television interview shows.

Nancy completed her Masters in writing and is almost finished with her doctorate in education. Fulfilling one of her own predictions from a vision at age nine that she would one day be a published author, she wrote Silent Witness: the True Story of a Psychic Detective with co-author Steve Czetli, and now Travels With My Father: Life, Death, and a Psychic Detective. She is currently working on her first novel and on a series of historical books for children, the Little Miss Stout series, based on her grandmother's childhood on the docks of New York. Nancy also teaches college writing and Spanish, and in her spare time continues to write.

She lives in Western Pennsylvania near her son Travis, his wife Rhonda, and his two children, Trey and Kaitlyn. Heidi also lives nearby in Pittsburgh with her wife Diane and children Joshua and Sarah. Her eldest son Blake lives in Florida where he indulges his love for fishing. Nancy lives with her black lab Herbie, 114 pounds of enthusiasm and hilarity.

Visit Nancy Myer's website to learn more about Nancy and the psychic services she offers.