Mission: Jimmy Stewart and the Fight for Europe 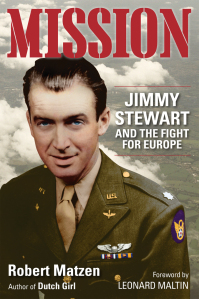 "Great gift for anybody like me who just loves Jimmy Stewart and loves a good story of history that you've never heard before." Glenn Beck

"This week's must-read books...A revealing look at the wartime service of one of America's most beloved actors." New York Post

"Military and movie buffs alike will revel in this vivid portrayal..."

"An illuminating, recommended look at a hidden chapter in Stewart's life." Library Journal

"This book gives us the best glimpse we will ever have of what that experience was like for him and the men he flew with. Thank you, Robert Matzen." Kelly Stewart (Jimmy Stewart's daughter)

On a Saturday in March 1941, Jimmy Stewart, America's boy-next-door actor, left Hollywood behind and took the oath of service in the United States Army Air Corps.

Once in the service, Stewart ducked the press at every opportunity and to a large extent for the next four years remained behind the secure perimeters of air bases in the Western Hemisphere serving his country. Then at war's end he refused to discuss what had happened "over there," and continued to be tight lipped about it to the end of his life. In effect, Jimmy Stewart took the story of his military service with him to the grave. 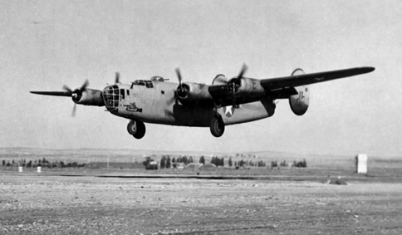 Mission: Jimmy Stewart and the Fight for Europe tells that story by presenting the first in-depth look behind the scenes at Jimmy Stewart's life in the skies over Germany through 20 combat missions, and, ultimately, his return to Hollywood the changed man who embarked on production of his first post-war film, It's a Wonderful Life.

Following up on his meticulously researched Fireball, author Robert Matzen has once again combed official federal government archives, this time the 500 pages of the James M. Stewart personnel file, to track his progress from private to full colonel. Matzen sifted through thousands of pages in the official Records of the 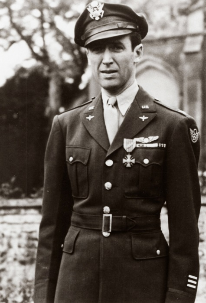 Army Air Forces to piece together the 20 combat missions Stewart flew over Europe. Matzen took to the skies in the B-17 Flying Fortress and B-24 Liberator—the two heavy bombers piloted by Stewart; interviewed surviving fliers who flew with Stewart stateside and in Europe; accessed the James Stewart Papers at Brigham Young University; and explored the Motion Picture Academy of Arts and Sciences Library.  Then Matzen walked the muddy earth of Tibenham and Old Buckenham in East Anglia, the two air bases most often used by Stewart in his combat missions.

But Matzen takes the story further to also tell of others in the fight for Europe—the pilots that Stewart commanded in the 703rd Squadron; enlisted men flying aft of the flight deck; German aviators contesting the bomber stream of the Mighty Eighth; and German civilians caught in the crossfire of a titanic global struggle.

What emerges in Mission is a set of people you will never forget led by a Jimmy Stewart you never really knew—until now.

Robert Matzen spent 10 years working in communictions for NASA Headquarters. He broke into print straight out of college with the mass-market paperback, Research Made Easy: a Guide for Students and Writers for Bantam Books. Mission was Robert's seventh book and preceded Dutch Girl. The award-winning and best-selling Fireball completes his trilogy, "Hollywood in World War II." Over the years, Robert has gained a reputation as one of the most thorough researchers in the field of nonfiction. He has discussed Hollywood history on U.S. and international television and had a global reach on radio.

Robert is a filmmaker whose work has achieved national broadcast and won major awards. His 2001 historical documentary, When the Forest Ran Red, was broadcast on PBS and is now recognized as the classic interpretation of the French and Indian War in America.

To learn more about Robert Matzen or read his blog, visit RobertMatzen.com.