My Unlikely Road to Hollywood 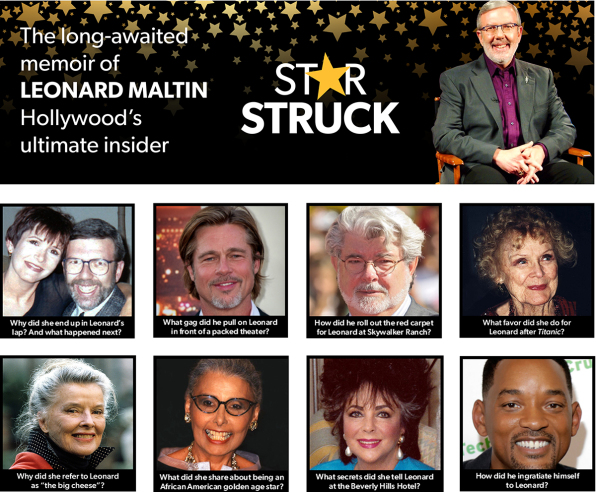 Hollywood historian and film reviewer Leonard Maltin invites readers to pull up a chair and listen as he tells stories, many of them hilarious, of 50+ years interacting with legendary movie stars, writers, directors, producers, and cartoonists. Maltin grew up in the first decade of television, immersing himself in TV programs and accessing 1930s and &lsquo;40s movies hitting the small screen. His fan letters to admired performers led to unexpected correspondences, then to interviews and publication of his own fan magazine.

Maltin's career as a free-lance writer and New York Times-bestselling author as well as his 30-year run on Entertainment Tonight, gave him access to Katharine Hepburn, Elizabeth Taylor, Sean Connery, Shirley Temple, and Jimmy Stewart among hundreds of other Golden Age stars, his interviews cutting through the Hollywood veneer and revealing the human behind each legend. Starstruck also offers a fascinating glimpse inside the Disney empire, and Maltin's tenure teaching USC's popular film course reveals insights into moviemaking along with access to past, current, and future stars of film, such as George Lucas, Kevin Feige, Quentin Tarantino, and Guillermo del Toro.