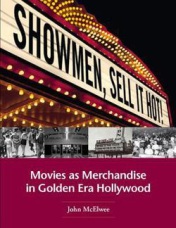 SHOWMEN, SELL IT HOT! IS THE 2013 USA BOOK AWARDS WINNER IN THE CATEGORY OF HISTORY: MEDIA & ENTERTAINMENT OF THE YEAR!

Praise for Showmen, Sell It Hot!

"Every chapter of this lavishly illustrated volume is packed with information that was new to me and fascinating to learn. I can't say enough about this entertaining book or the ongoing research John McElwee offers at his site."

"Catnip for movie buffs, all told in an irresistible, wryly amusing voice... a must-read book!"

“After an initial browsing of John McElwee’s SHOWMEN, SELL IT HOT!, I realized this was a book that I wanted to sit down and thoroughly absorb each and every page. As a life-long film buff, I found the book’s subject matter to be both original and insightfully written. A major plus is the generous use of period visuals that were carefully chosen and assembled. In conclusion – ‘Great Stuff!’”

Film Historian and Author of Inside Warner

Memo From Darryl F. Zanuck  and many more

"John McElwee's Showmen, Sell It Hot! deals with the sensual business of selling a movie. It looks, feels, and smells like the lavish movie books of yore. It's elegantly designed, beautifully printed, and, as content should follow form, it's engagingly written, transporting the reader to a time when a theater manager had to be as much of a showman as the producer of the film he was exhibiting."

Author of Harlow in Hollywood: The Blonde Bombshell

Boy Wonder to Producer Prince, and many other books

Based on his million-visit blog and with new content and many rare and previously unseen images, Hollywood historian John McElwee takes a first-time look at the campaigns to sell the motion pictures generated by Hollywood's fabled movie factories. A network of showmen brought these campaigns to life on behalf of theatres large and small in thousands of locations around the United States and represented the unsung heroes of the motion picture industry. This lavishly illustrated, 304-page hardcover takes a marketing approach to the making and merchandising of important Hollywood pictures. Topics include:

See the effects of the Depression, censorship, World War II, the Cold War, television, and the counterculture movement on the changing tastes of moviegoers, and the way showmen responded with creative and sometimes zany concepts. With 125 full color and 244 black-and-white images, this is a volume that will leave you wanting more!